Who are you calling feral?! 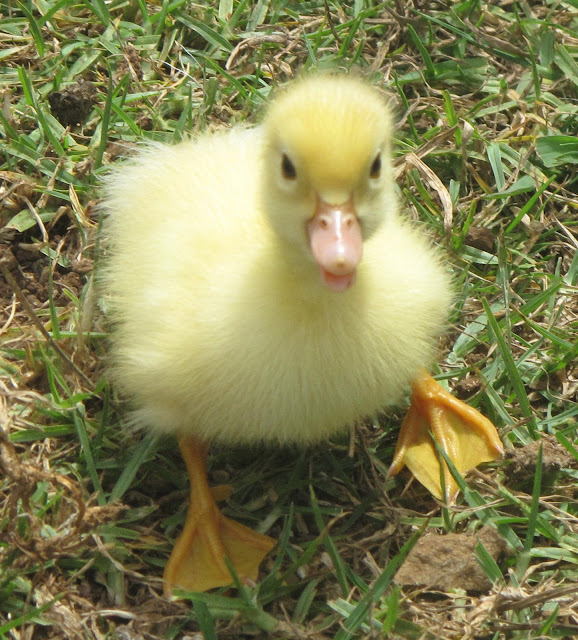 They don't come much cuter than this little fluffy duck.
With at least 9 ducklings seen in two clutches this week, we can officially say we are on the first step to these Muscovy ducks being feral on Norfolk Island. Animals must be recorded as breeding in the wild for a number of years before they are officially feral. Here is the proof of the first time breeding of the Muscovy ducks at Norfolk. Along with a lot of fowls (chooks as we call them in this part of the world), many other breeds of ducks, and grey and white geese are deposited in the area of the island known as the Kingston and Arthurs Vale Historic Area (KAVHA). It's a bit like a retirement home for elderly or unwanted poultry of various kinds, which the owners have no inclination to kill for their supper.This could be because of squeamishness or because Henny Penny or Daffy could be a bit too much like a family pet.
Mother duck and the whole flotilla are spending most of their time paddling on the Watermill Dam these last few days, but when I first found them 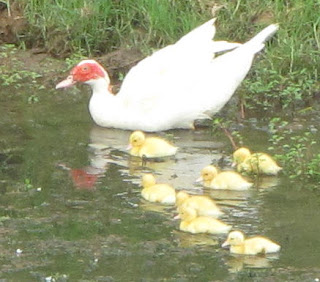 they were waddling about on the grass, with (apparently) Dad hissing at me when I went near. I could not help but notice how blue his eyes were as he threatened me with violence. (This was a rather awkward situation as the ducklings were continuously coming towards me, and not the other way round.)
The rather unattractive red wattling all over the face of these ducks will be the look of these little yellow ducklings before we know it, so it's a good idea for locals to take the kids to see them while they are still cute as bathtub ducks.

It was an extraordinary day in KAVHA, as I wandered amongst the ruins of the colonial and convict past, as the chooks at every second pace seemed to be cluck-clucking to newly hatched chicks. I frequent this area often and have never seen so many brand new chicks at one time. 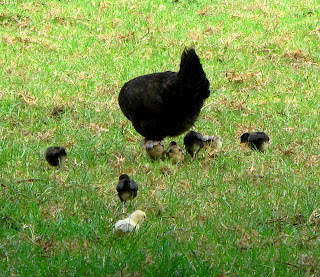 The Watermill dam was originally built in 1790, only 2 years after the settlement of the island.  The dam was constructed of earth, and placed at the confluence of three streams, with the swampy ground below it drained by a man-made channel, rendering the area more suitable for agriculture. The stone mill building was a later addition, coming many years later after the first settlement had been abandoned in 1814 and the infamous convict settlement begun in 1825. The mill was constructed in the 1830s and was used for the grinding of grain for the little colony whose population peaked at around 3000. 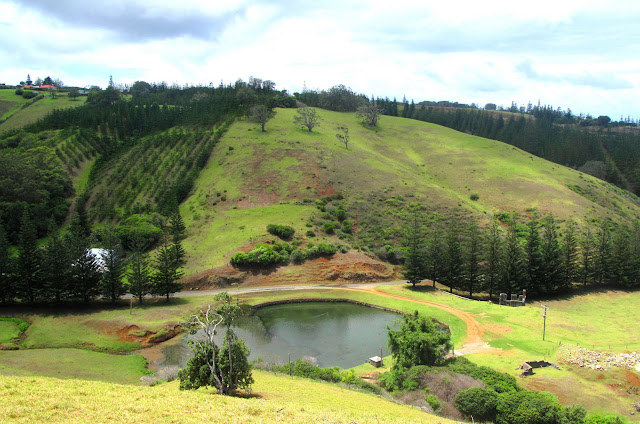 The remains of the mill building can be seen nestled below the pines to the right of the picture.
(Double-click on any picture to magnify it.)
Later in the 1830s a report reveals that the earth-walled dam was no longer able to hold water, and stone lining was added to make it more secure. In the days after the Pitcairn settlers arrived, (1856) it was obviously no longer watertight, as it was used as a market garden, and the 2nd generation owner of the property from which this photo was taken tells me it was still a vegetable garden in the 1960s. By the 1970s it was once again being used as a reliable water storage facility.
As well as providing a place for retired farmyard birds, the dam attracts weary travellers which rest here on their way to and from New Zealand, some coming from across the northern Pacific or heading back to Siberia and Alaska to breed. Blown off course we sometimes see spoonbills, cormorants, egrets and of course ducks. 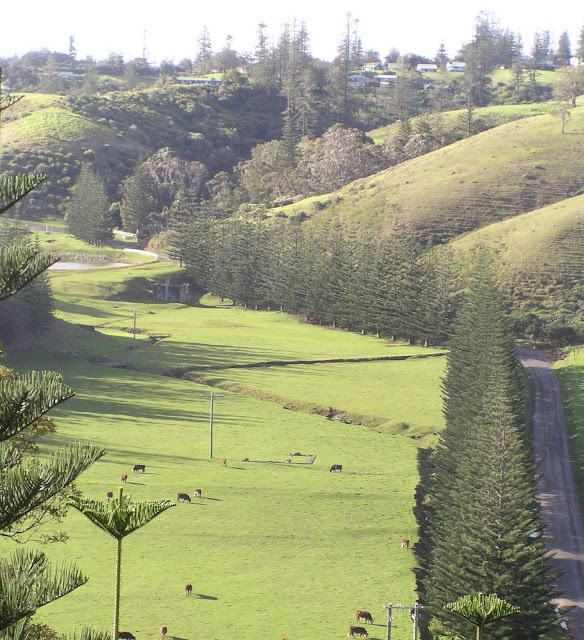 In the image above, the roadside is lined with Norfolk Island pines. The mill is in the shadows cast by the trees at the top end as they march along Aunt Jemima Avenue. It's a lovely custom on the island, that 100 trees are planted to celebrate the 100th birthday of a resident, and Aunt Jemima's avenue was lovingly created by her family and friends in 1971.


(Thanks to Liz at the KAVHA Research Centre for the historical information on the dam, and to Ron for his recollections, and helping me get above the dam and mill for the image.)

Posted by Norfolk Island Nature Watch at 12:18 AM No comments: 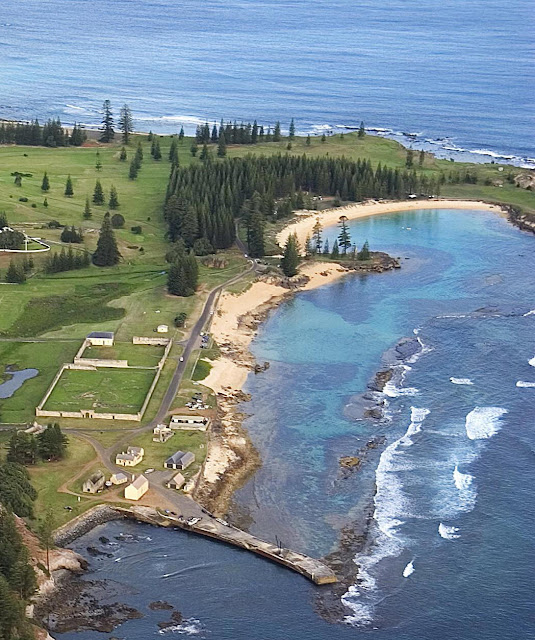 The sandy beaches we have are beautiful and within the reef at the southern end of the island (at Emily Bay and Slaughter Bay, in this picture) the swimming is safe and snorkeling reveals amazingly diverse and interesting marine life. It is especially remarkable given the comparatively small area that so many species of coral, fish and other marine life are found there.  Norfolk's coral reef is the second most southerly reef in the world.


The volcanic origins of the island also provide interesting rock pools formed from lava beds and eroded lava tunnels. A lifetime could be spent examining these small worlds, which provide safe havens for many species and fish nurseries in some where masses of coloured juveniles start their lives. 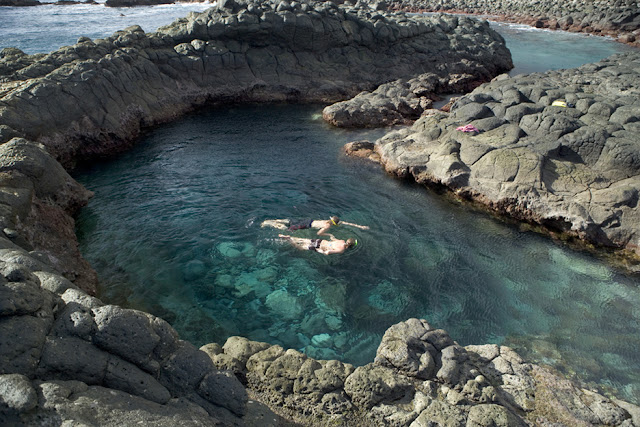 One of the island's favourite rock pools for snorkeling is called Crystal Pool. It is at Point Ross on the south western end of Norfolk with an access track that assists in keeping the area from being overcrowded, by being a little challenging. It is not recommended to swim there in big seas, as waves have been known to wash into the pool and occasionally take the unsuspecting snorkeler for an unexpected dip in the ocean. Local knowledge about suitable conditions is always wisely sought, anywhere we travel, and that applies equally here .

Similarly, big seas can wash unsuspecting creatures into the pools from time to time, and it is probably for that reason that a large number of stingrays appeared there recently.
The photos here show some of a group of stingrays that found their way into the Crystal Pool in December 2010. 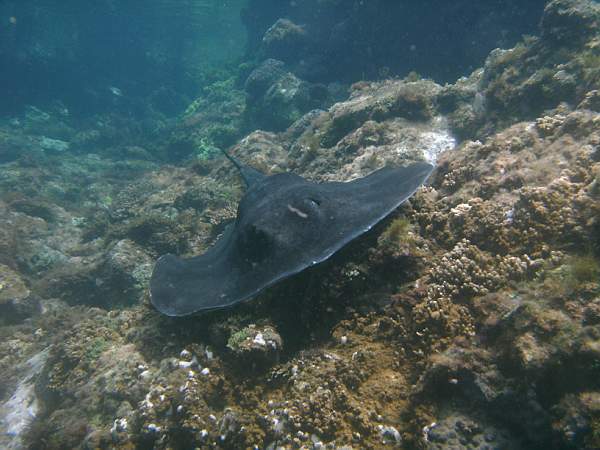 There was a group of about 20, which were possibly just some of an even larger aggregation, some of which were washed into the pool and stranded there for a few days. Very rough seas and high tides had been experienced shortly before the time these were seen. 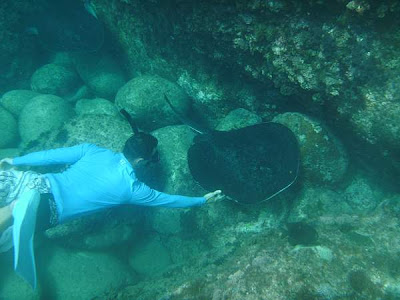 Mark Scott (seen here patting one of the rays) provided these photos. Mark's enquiries about the presence of such a large number of these rays led to Jack Marges who ran Norfolk's scuba diving company Bounty Divers, for many years.  Jack has seen large groups of male stingrays regularly but more often encountered them in the open ocean, or tucked away in more open bays and usually a little later in the summer, around February. Large groups have been seen by others at Anson Bay over many years as well.  Jack's previous experience with rays identified them as the Blotched Fantail ray (Taeniurops meyeni)  which was confirmed by Malcolm Francis, a New Zealand-based researcher .(In older publications on Norfolk fishes, this species was called by the earlier names Taeniura meyeni or Taeniura melanospila.) 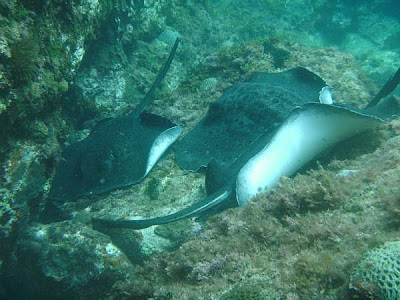 Mark noted that all the rays were male (identified by the 'claspers' either side of the tail), and Malcolm said that so far it is not known why they gather together this way, however local observations confirm that it is a regular summer event.

There was a further  report of about 26 (possibly) rays seen near shore at Anson Bay in December also.

The group in Crystal Pool gradually reduced in number until there were 3 during the first week of January, and shortly after that they were all gone. 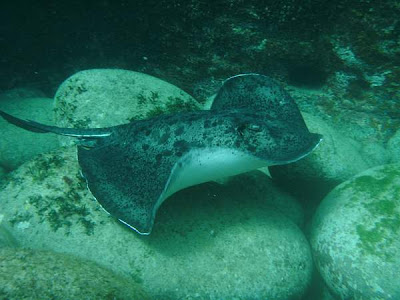 The current operator of Bounty Divers tells me that there have been consistently high numbers of rays being sighted at dive spots around the Norfolk group of islands, particularly at a dive spot known as Swiss Cheese, south of Norfolk.
The water temperature at Norfolk continues to warm 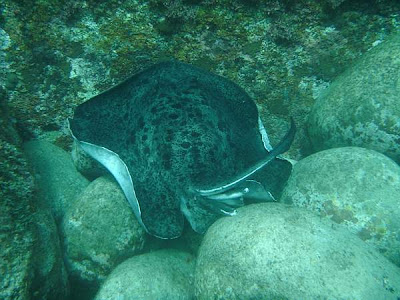 up well past the heat of summer, and swimming in the crystalline waters, surrounded by beautifully coloured fish and interesting corals, anemones and fascinating hard-to-define marine life forms can be enjoyed all year round with only a light wetsuit (if any) required even in the winter.
More underwater images will appear here before too long.
I'm off to the beach now!
Thanks to the Norfolk Island Visitors Information Centre for the aerial image of Emily and Slaughter Bays, and of the snorkelers in a small part of Crystal Pool. Special thanks to Mark Scott for providing this observation, images and research.
Posted by Norfolk Island Nature Watch at 3:15 PM 2 comments: