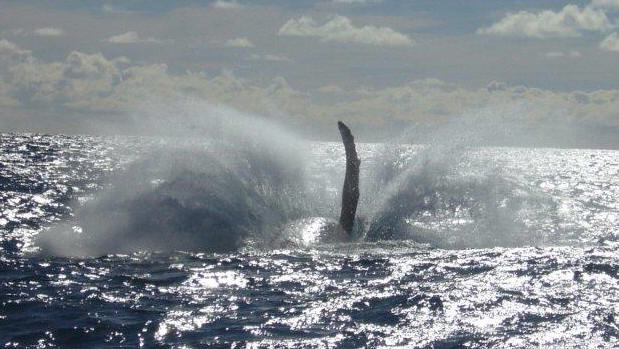 The annual migration of humpback whales is under way, with a number of sightings having been reported around the island over recent weeks. At this time of year the whales are heading north from their Antarctic feeding grounds, and they are moving pretty steadily so as to reach warmer waters where their calves can be safely born without fear of freezing to death.
Despite best attempts at keeping the required distance away from the whales, there are times when their curiosity gets the better of them and they make their presence felt around fishng boats. The excellent image above was captured by Brian Buffett at Norfolk Island, on such an occasion.

A week ago we watched 3 pods for a couple of hours, spectacularly breaching and slapping the water with their fins, and apparently in no hurry to leave our shores. One observer with a clifftop home providing excellent views reported that at least one of our 3 pods of whales already had a calf with it, which might account for their slow progress.

The return journey sees numbers peak during October. Research is ongoing to determine where 'our' whales are headed for calving. We do know that at least one radio-tracked humpback in recent years has come through Norfolk after leaving New Caledonia . This is a logical route to follow along the submarine Norfolk Ridge which runs between New Caledonia and New Zealand with Norfolk Island being the only place where it emerges through the ocean's surface.
The commercial taking of whales as they migrated through Norfolk's waters was historically an important component of the island's economy at various times. The whaling station at Cascade was operating until 1964.
The recovery of whales numbers at Norfolk is not as spectacular as the populations that migrate along the east coast of Australia, and research is under way to find out why.