Two new species have been spotted over the weekend, reported by John O'Malley again who provided the images here. 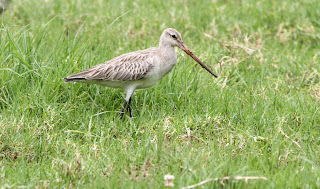 The Black-tailed godwit is a less common visitor to Norfolk Island than the Bar-tailed godwit, but they are here together right now, very conveniently providing a  great opportunity for comparison. The substantially longer  beak of the Black-tailed is easier to discern when you can see what it is longer than, ie the Bar-tailed's beak. Yesterday there was one Black-tailed pecking at the mud alongside two of its Bar-tailed relations in Kingston.
These birds breed in Iceland, Russia, Belgium, Holland, Germany, Denmark, Poland and France, as well as many locations throughout the UK. It amazes me to think of the many perils it may have encountered on its way through China, Burma and the Philippines on its way to our little island, where we hope it can safely rest and recharge before moving on to New Zealand, where the Bar-tailed godwits are a more common occurrence. 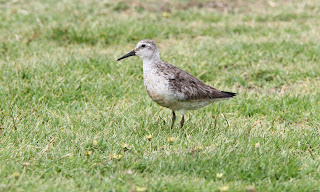 The Red Knot seen at the right is another that breeds in the northern hemisphere, notably Greenland, Siberia and arctic north America, before undertaking the long and hazardous journey through Asia and Australia on its way to New Zealand. Various groups migrate by different paths, some to South Africa and others to Patagonia in South America. This bird was seen with a flock of Ruddy Turnstones in Kingston also.
To those of us who have never seen these birds in their breeding plumage, the name is a bit mysterious. Descriptions provided by those in the north paint a picture full of colour ; 'upperparts feathered black, heavily mottled and flecked with chestnut. Entire underparts rich uniform chestnut orange.' Clearly they are no longer dressed to kill when they arrive here to relax after their exhausting time of attracting mates and breeding. Norfolk Island is the place for that relaxing getaway that not only people love to experience, it seems. The word has been out amongst the world's bird populations for centuries. You don't need to dress up, just come to Norfolk and recuperate.

One other observation ~ last night we heard the first Black-winged petrel of the season coming onshore to breed. Cat traps are fully activated to protect these gentle birds in our area. Most of the Black-winged petrels that attempt to breed on Norfolk's main island will be killed by cats.
Posted by Norfolk Island Nature Watch at 4:01 PM