The winds are blowing straight from Antarctica, or that's how they feel. We've had strong southerlies for weeks and a fresh blast of rain and wind has arrived in the last few days. When all the folks along the east coast of Australia heave a big sigh of relief because the low pressure systems move out to sea, that's when we know it's time to batten down the hatches. Deluges of rain driven by strong winds are visiting us, mostly at night. We've had a long overnight power outage and many tree limbs falling, but no severe damage to property as far as I know. We are never sure where the exhausted birds arrive from, but it's pretty certain that something unexpected will find its way here when the winds are so strong. 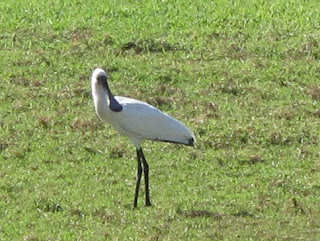 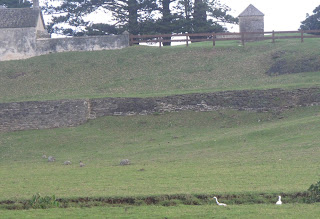 Our most recent arrival has been a Great Egret, which soon found the Royal Spoonbill that had only arrived days earlier, and they have been sifting the freshwater drains and wetland areas of Kingston together since they arrived. Here they are seen happily feeding in the shadow of the convict-built hospital and the rock wall that shores up the sides of a road constructed in the earliest days of the penal settlement (1788-1854). 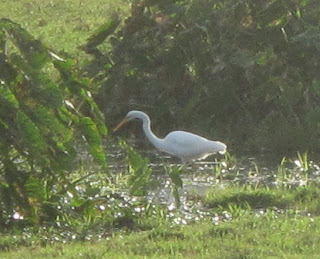 It's very interesting to have the Great Egret here at the same time as a growing flock of Cattle Egrets. 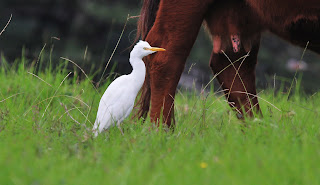 From an original 6 birds the group of Cattle Egrets has gradually grown to 19 since May, and for local birdwatchers seeing the size difference in person , especially the long sinuous neck of the rarer Great Egret, is a hundred times more informative than seeing them in bird books. 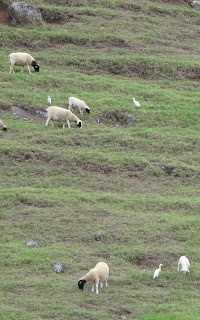 The Cattle Egrets, (fairly regular Winter visitors) seem to enjoy the company of a flock of sheep on the steep hill above the Watermill Dam (see images of the dam in previous blog re feral ducks), as well as some of our local cattle, and have no hesitation in moving around the island to the north-west for a few days, then east and then back to the south.

Most interesting of all however has been the exhausted Fairy Prion that was spotted and photographed by John and Sue O'Malley arriving and resting on the reef at low tide during another strong southerly wind period in early July. I've made a number of enquiries and have so far been unable to unearth a previous record of this species here, so it may be a first. 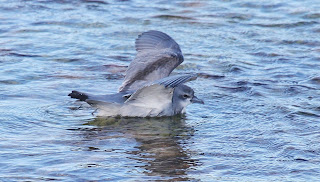 With Anson, Cassidy and Lilli King we waded out and removed the little bird from the reef where the incoming tide would have swamped it within hours. Next morning when we checked on it in the sheltered location where we'd placed it above the high water mark, we found that it had quietly died during the night.

One can only wonder how many hundreds of birds are blown offshore or from waters around New Zealand, Australia, even New Caledonia perhaps, and never find the tiny speck of land that is Norfolk Island.
Posted by Norfolk Island Nature Watch at 6:51 PM